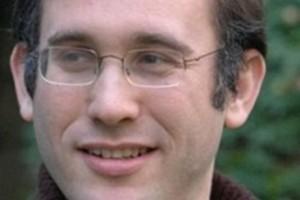 “Mainstream Israel already had its superheroes.”

Asaf Galay explores Jewish and Israeli cultural history in a variety of visual media. He has curated museum exhibits on Jewish fashion designers, the Dreyfus Affair, and the late singer Amy Winehouse. In film, he has traced the history of Tel Aviv-Jaffa, analyzed Israeli humor, and examined the life and legacy of Zionist hero Joseph Trumpeldor. A self-described Yiddish activist, Galay is screening two films at the Boston Jewish Film Festival. “The Search for an Israeli Superhero,” plots the cultural history of modern Israel through its comic books. “The Muses of Bashevis Singer,” sketches a portrait of author I.B. Singer through the eyes of the women who translated his stories from the Yiddish. He recently spoke with BJFF board member Ken Shulman.

Ken Shulman: Both of the films screening at the BJFF deal with the idea of myth. In “The Search for an Israeli Superhero,” we see the birth of Israel’s national myth.

Asaf Galay: Israel is still a very young country. Yet it was born with a distinct culture which needed to be defined and celebrated. One of the best places to do that was in comic books. It was clear those comic books couldn’t be like American comic books, with superheroes who always triumph over evil. Mainstream Israel already had its superheroes in its pioneers and politicians and generals. To celebrate its popular culture, Israel needed something more realistic—stories of ordinary people who dealt with the problems of ordinary life. And who were clever and funny in the process.

KS: Is this how the new country wanted to see itself? Clever and funny?

AG: One of the first comic book characters, and one of the most successful, is Uri Muri. It’s the first place the word “sabra” was used to define an Israeli. Uri Muri is a kid. He’s a little bit naughty. He likes to make mischief. But in his innocence and goodness he understands the problems of his new country. And he helps to solve them. He finds a way to bring more milk to a kibbutz. He helps build more housing for Israel’s new immigrants. He’s intuitive, clever, and very funny. In many ways he embodies the spirit of the start-up culture that dominates the Israeli tech scene today.

KS: Sabraman was a typical comic book hero. And he was popular.

AG: Sabraman was basically an American-style superhero, transposed into an Israeli context. He enjoyed some success early on. But that kind of hero, the army soldier who fights and defeats Nazis and terrorists, works better in mainstream Hebrew literature. In Israeli comic books, the most successful characters are ones who seem to have come out of a Sholom Aleichem story. They’re shlemazels. Take the comic book character Falafel man. He’s fat and slow and harmless, a superhero who tries to destroy his enemies by throwing falafel at them and always needs help from his mother. He’s nice, and funny, and lucky, and somehow he manages to win in the end. And he’s the most popular comic book hero in Israel.

KS: Israeli comics aren’t always about ordinary life. They were one of the few places people could read about the country’s nuclear program.

AG: There was one comic series that had a storyline about a nuclear plant in the desert that developed a dangerous leak, and that transformed a professor who was working there into a green giant with superpowers. From the descriptions, it was very clear that they were talking about Israel’s facility in Dimona. Israeli censors were very strict about keeping Dimona out of the news. But they didn’t pay any attention to the comic books. As a result, the kids in Israel knew more about their country’s nuclear program than the adults.

AG: It’s true that Singer wanted to preserve the memory of Jews in Eastern Europe. But he’s not Sholom Aleichem or I.L. Peretz. And he doesn’t subscribe to an idealized vision of socialism either. Singer was trying to reach an American audience. Yes, he sometimes writes about great scholars and tzaddikim. And yes, he always writes in Yiddish. But those Yiddish stories are mostly about real people, about street life, about thieves and prostitutes and pimps. It’s not an idealized world. It’s a real world. Or one that feels real.

KS: How did he make that world relevant to American readers?

AG: He developed the Singer system. This was a group of young women I’ve called his muses. These were all young Jewish women, very bright, who would keep him current about their generation, its hopes and its interests and its problems. They became his translators. But they were more than translators. They told him how his stories might be perceived by their peers. They told him what he needed to explain, and what he needed to leave out. Even though he didn’t write in English, Singer is a very American writer.

KS: Is there a place where the myths of Singer and the myths of Uri Muri and Falafelman come together? Asaf Galay: Singer used to say, and not entirely joking, that one day the dead would come back to life and want to read his books in Yiddish. I would like to see future Israeli generations write comic books in Yiddish. It would make the language so much richer. The idea is not entirely a fantasy. Right now the biggest market in Israel for comic books are the Haredi—the ultra-orthodox. They are developing their own heroes, and their own graphic style, and stories about life in their communities. They may be socially conservative. But in this art form, they’re the avant-garde.