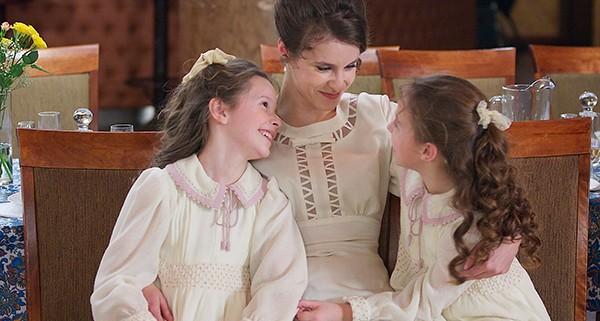 “They’re just not interested in that part of their history.”

A polymath with interests ranging from spirituality to psychology to pop culture, Robert Mullan has directed more than 40 feature and documentary films and written over 20 non-fiction books.

In “Gitel,” a feature film from 2014, Mullan tells the story of a young girl who miraculously survives the holocaust in Lithuania and lives, consumed with guilt, as a musician in the Soviet Union. Shot entirely in Lithuania, “Gitel” also wrestles with that country’s inconvenient truth—a complicity with the Nazi genocide that is still largely unacknowledged. He recently spoke with the BJFF’s Ken Shulman:

Ken Shulman: The story of “Gitel”—the story of a survivor and her guilt—could be set almost anywhere in Eastern Europe. Why Lithuania?

Robert Mullan: I knew very little about Lithuania until I came to teach a month long course in psychology at the University of Kaunas in 1999. It was a fascinating time, with the country transitioning from communism to capitalism. I stayed on to write a book called “Voices of Pain.” I interviewed homeless people, inmates in psychiatric hospitals, inmates in prison, ordinary people, asking them whether their lives were truly better, or whether they’d remained the same.

KS: Were they better?

RM: A lot of people were profoundly disappointed. For many of them, it felt as if they were square buttons who had been declared round buttons overnight. They remember the Soviet Union as a place with good schools and free health care. The basic fact is if you’re poor, it doesn’t really matter whether you’re living in a command economy or a free market economy.

KS: Are Lithuanians eager to tell their story today?

RM: There are two big stories about Lithuania in recent history: the Nazi invasion of 1941, and the country’s independence from the Soviet Union in 1991. They’re eager to talk about 1991. When we shot “We Will Sing,” a film about the 1991 independence movement, the people in Lithuania couldn’t help us enough. In contrast, filming “Gitel” was extremely difficult. The first scene we shot in “Gitel” was set in the synagogue in Kaunas. Reporters and photographers were waiting for us there, even though we’d kept the shoot quiet. When articles appeared in the papers about someone who’d come to make a film about 1941, there were comments from readers like “they should have killed them all” and “even if there were two left, there should be none left.” I was astonished.

KS: What’s so volatile in 2015 about the story of a Lithuanian holocaust survivor?

RM: Lithuania lost a higher percentage of its Jews during the holocaust than any other country in Europe. There are over 250 mass graves there today. But it’s not so much the statistics that make the subject of the Shoah taboo. It’s that the Lithuanians were killing their Jews even before the Nazis arrived in 1941. What makes the tragedy even more stunning is that for 600 years, Lithuania treated its Jews better than any other country. Vilnius, the capital, was a great center of Jewish culture and learning that Napoleon once called “the Jerusalem of the North.”

KS: How do we go from six centuries of tolerance to a frenzy where people are herding their neighbors into ditches and shooting them?

RM: That’s a question better fielded by a historian than by a filmmaker. The standard explanation is that many Lithuanians saw the Jews as communist sympathizers who had to be eliminated. And there were historic tensions between the communities. Even today, you’ll find schoolbooks there that depict Jews as Christ killers.

KS: Still, you were able to shoot the film, and at prime locations like the synagogue and Kaunas’ Ninth Fort, site of a mass killing.

RM: Lithuania is the land of the free market. It’s also the land of corruption. When we went for our permits, we told them we wanted to shoot a scene at the Ninth Fort. They quoted us a price. Then we told them we were going to recreate the mass killing there. They asked for a little more.

KS: Your cast was almost entirely Lithuanian. So was your crew. How did they react?

RM: A couple of crew members said they couldn’t work on the film after a couple of days. And a lot of the younger actors felt they were betraying their fathers and their grandfathers by being in the film. What truly struck me and my colleagues was watching the extras when we filmed the mass killing at the Ninth Fort. They were extras playing Jews, Nazis, and the Lithuanian Activist Front—the group responsible for the killings. The extras seemed to really enjoy putting on their white armbands and playing LAF men.

KS: Not all Lithuanians participated in the genocide.

RM: True. Even some of the LAF thugs pretended they couldn’t find their neighbors during roundups, or refused to kill them. I’d always imagined that the noble people who rescued Jews would be professionals—doctors and teachers and lawyers. But in Kaunas most of the rescuers were poorly educated peasants, people who instinctively knew that what was happening wasn’t right. And a lot of the killers were doctors, dentists, teachers, and priests. It proves that education doesn’t immunize you from immorality.

KS: Can education immunize us from intolerance?

RM: It depends on the education. If you look at the books on sale at the Center for the Study of Genocide in Vilnius, you’ll find that almost all of them deal with partisans or deportations to the Soviet Union. There are very few titles about Lithuania’s Jews. The underlying assumption, and one that is supported by many European academics, is that Stalin’s crimes were just as bad as Hitler’s crimes. This “Double Genocide” theory is very popular among certain Lithuanians. And it’s a very convenient excuse for Lithuania not to face the crimes it committed against the Jews. They’re just not particularly interested in that part of their history.